The Three Branches of The Federal Government 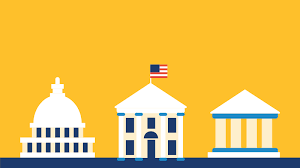 The three branches of the federal government are:

The legislative branch is in charge of creating laws. It consists of the House of Representatives and the Senate which together form the United States Congress.
Congress is given its powers in Article I of the Constitution. These powers include declaring war, enacting legislation, the right to confirm or reject presidential appointments, and powers to investigate government officials.